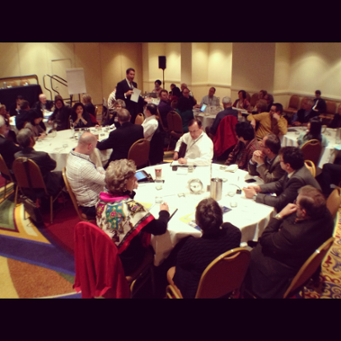 “Every person wants their kids to be good human beings. Depending on the culture, the details get fuzzy. And how those details fits into the national education system is a big issue as well.”

This afternoon, educators gathered in Washington DC from around the world to discuss how to build a comprehensive global system for character education that can be leveraged and scaled appropriately. The International Summit is part of the 2012 National Forum for Character Education — a gathering of educators and other citizens interested in building up people of character within their given cultures. This year’s International Summit featured representatives all the way from Japan and Taiwan, to Colombia and Kenya. The summit was structured as an in-depth and interactive discussion with participants rotating through to different groups and meeting new discussion partners.

Here’s how it played out with some highlights from each section:

Lightning round – a quick review about the state of character education from every nation involved. A few of the highlights:

to the entire group after each discussion was through. Sometimes the discussions about each question brought more questions, and sometimes answers. Here are the questions and what some of the discussion groups came up with.

1) What is the appetite for character education around the world?

2) What committments do we share? What cultural considerations must be made as we develop an international movement

4)What are the immediate next steps for unleashing an international movement?

The first International Summit at CEP’s National Forum on Character Education was an absolutely smashing success. We heard from passionate, influential educators from around the globe– with a common mission to spread and nurture quality character education across cultures and borders.