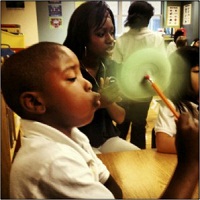 David Brooks wrote a recent column about the importance of character and noted the social research that shows its importance. I was cheering him on as I read. I was still with him as he described research that shows that proper experiences can improve performance values such as resilience and self-control.

But then he added, “The superficial ‘character education’ programs implanted into some schools of late haven’t done much either” and I was dismayed. Statements like this add to impressions that character education doesn’t work, but we have evidence that it does. Of course, there are superficial attempts out there, but what schools do when they implement CEP’s framework, the 11 Principles of Effective Character Education, is not superficial. It is complex and challenging, and it does make a difference.

Take the example of Community of Peace Academy (CPA), in St. Paul, Minnesota, a K-12 school with a rich history of accomplishments. In 2003 and 2014, they were named a CEP National School of Character; in 2005, a National Peacebuilders Model Site by Peace Partners, Inc.; and in 2007, a National Charter School of the Year by the Center for Educational Reform. The school believes that people will “more likely make moral decisions and choices if they are members of a moral community.”

With a highly diverse student population predominantly comprised of Asian, Hispanic and African-Americans, 86% of whom qualify for free or reduced lunch, CPA has developed a school community that best exemplifies the concept of rigor and compassion. CPA’s graduation rate is 86.9% and of the graduates, 93% go on to 2- or 4 year-colleges.

While we typically showcase the total school climate, the power of character education is most important for the difference it makes for students. While we don’t always know what happens to students when they leave Schools of Character, we have this powerful testimony in our files.

As a 7th grade student, Mandy had been failing every class at her last school, her attendance was terrible, she had been hospitalized with suicidal tendencies and she absolutely hated school. As a new student at a School of Character, she was cared for and connected to programs that would help Mandy turn her life around. Over the next two years, she blossomed into a beautiful and healthy young lady. At the end of her 8thgrade year, Mandy learned that she and her mother were moving. In the middle of her first year in high school, she sent this e-mail to her principal:

Brooks ends his column with this: “Character development is an idiosyncratic, mysterious process. But if families, communities and the government can envelop lives with attachments and institutions, then that might reduce the alienation and distrust that retards mobility and ruins dreams.” Yes, we do need to get all stakeholders together, but calling character development “idiosyncratic” and “mysterious” doesn’t help.

Character education works best when it is intentional and permeates the entire school culture and curriculum. That’s what we see in our Schools of Character, and we hope to keep growing the program so that more schools can be like Community of Peace Academy and more students like Mandy can turnaround.

Learn from our Schools of Character first hand at this year’s National Forum on Character Education, October 30th through November 1st in Washington D.C.