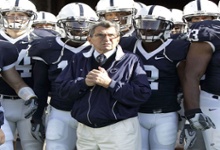 As you have probably heard by now, Penn State’s illustrious football program is in shambles following allegations that several boys were molested by Jerry Sandusky, former defensive coordinator, in a Penn State facility as part of a program hosted by the school.

The school officials’ decision not to report the assault to the police is disappointing, shocking, and unfathomable for many.

The events are not only an embarrassment to the school, but raise serious issues about the school’s quality of ethics in its leaders. The university fired legendary coach Joe Paterno and several other high-ranking officials since they failed to report the abuse to authorities.

A letter from Penn State University president Rodney Erickson stated his commitment to reinforce the moral imperative of doing the right thing, to lead by example, to be transparent during investigations, to respect the victims and their families, and to provide resources to help prevent future attacks.

Sadly, however, this is not the first time Penn State (and other colleges and universities nationally) has turned a blind eye to sexual offenses. It’s common practice, according to a 2010 report by the Center for Public Integrity.

46 forcible sex offenses were reported at Penn State from 2008-2010 as part of the Clery Act, yet only two were deemed actual offenses by Pennsylvania State Police. No arrests were made.

So the questions are:

Matthew Davidson, leading researcher and expert on excellence and ethics, posted an interesting and insightful reaction to this case. Read it here.

Share your thoughts here. We care what you have to say!