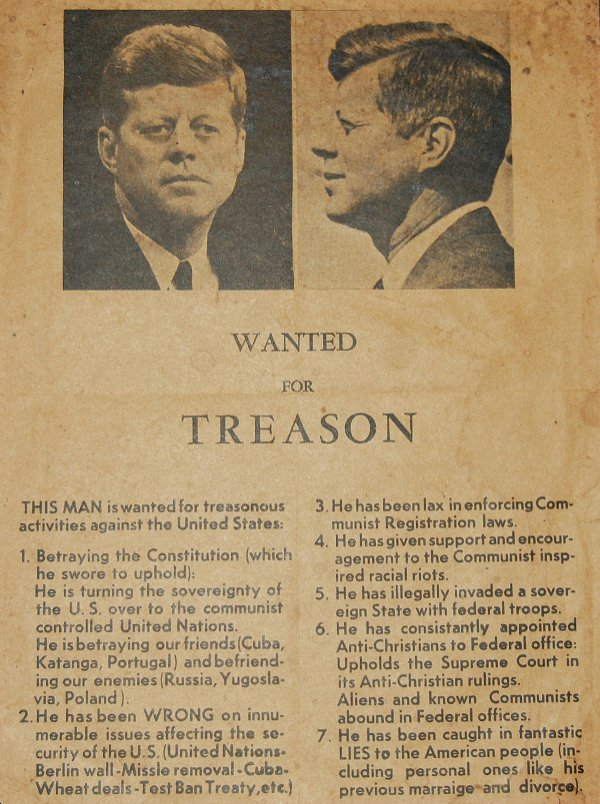 “Those who cannot remember the past are condemned to repeat it.”

When the Spanish philosopher and essayist penned those memorable
words in 1905, he was actually adapting an older quote from the British statesman Edmund Burke, who had observed in the 18th Century that “those who don’t know history are destined to repeat it.”

With apologies to both gentlemen, I would like to adapt the phrase
yet again for the 21st Century: “Those who don’t teach history all but
guarantee that it will be repeated.”

I feel moved to write those words this week as we mark the 50th anniversary of the assassination of President John F. Kennedy on Friday, Nov. 22.

Despite all the sad and nostalgic television retrospectives, commemorative magazines, and online blogs and other postings, however, I am struck by how little attention is now being devoted to the angry American mindset and climate of genuine hatred—and public hate speech—that existed a half century ago, and that shadowed the brash, young and inexperienced president in many parts of this country.

Fed by Cold War fears, both real and imagined, institutionalized racism, sexism and just about every other –ism you can think of, America in 1963 was by no means the enlightened time in which we like to think we live today. More specifically, the black-and-white footage of a grieving and stricken Dallas 50 years ago belies the fact that this was also the same community where leaflets like the one shown here, calling for President Kennedy’s arrest on charges of treason, were being distributed. Just weeks earlier, in fact, the U.S. Ambassador to the United Nations, Adlai Stevenson, had even been spat upon outside a downtown hotel. So, without a doubt, hate was in the air in 1963, in Dallas and in many other cities.

I mention this not to detour into any discussion of conspiracy, but to suggest that remembering context is so vitally important to teaching history and to learning from it. If we strip history of its true context, we indeed risk stripping it of its true meaning. After all, in order to feel
genuine empathy and respect for others, we naturally have to appreciate the circumstances and conditions that have shaped them.

This thought actually snuck up on me last week when I was reading an article online about the upcoming plans to commemorate the grim anniversary. At the bottom of the article, I made the mistake of reading some of the reader comments—which, regardless of the subject matter, almost always becomes a depressing exercise—where I noticed someone from Boston waxing nostalgic about JFK. But then the comment quickly shifted tone and ended, “I wish he could still be president today. He’d be so much better than that African Muslim we have now.”

I was momentarily shocked.

Here was a big JFK fan, likely a Democrat, happily displaying ignorance and, yes, hatred toward President Obama in an online public forum.

Momentarily, I had trouble reconciling this in my mind. But then I remembered how high racial tensions had been in Boston in the late 1960s and throughout the 1970s, particularly around the issue of court-ordered school desegregation and forced busing. Nowhere was the atmosphere more explosive and vitriolic than in the predominantly Irish-Catholic area of South
Boston.

JFK, of course, was also Irish-Catholic, the first such pol ever elected to the White House. In fact, that was another big reason why so many non-Catholics hated him then, fearing that he would serve the Pope before the U.S. Constitution. So, today, any discussion of President Kennedy that neglects to mention his religion would be akin to teaching about President Obama 50 years from now without noting his race.

In many ways, both then and now, I feel that hate has been one of the key driving forces of history. In service to avarice, it is the natural byproduct of fear, and frankly, the eternal enemy of character.

Earlier this month, Charles Haynes, chairman of CEP’s board and director of the Newseum’s Religious Freedom Project, published an important opinion piece in The Washington Post on the 75th anniversary of Kristallnacht, the infamous “Night of Broken Glass” in 1938 when Nazi thugs trashed and burned thousands of Jewish-owned store fronts and synagogues throughout Germany. Noting recent chilling news stories from an upstate New York school district, Haynes wrote, “Americans have long needed a wake-up call about pernicious anti-Semitism that still poisons our society – and last week we got one… Swastikas everywhere, Jewish kids attacked, Nazi salutes on school buses, anti-Jewish slurs – and much more – according to Jewish students and parents.” http://www.washingtonpost.com/blogs/on-faith/wp/2013/11/14/75-years-after-kristallnacht-anti-semitism-still-haunts/?tid=auto_complete

Anti-semitism… anti-Muslim… anti-gay… anti-immigration… anti-union… anti-government. It seems we hear those types of terms almost every day. All driven at the end of the day by fear and hate. But where do our schools now even find the time, or the curricular leeway, to teach about the actual history of hate and its devastating consequences?  From my own children and their friends, I get rolled eyes and bemused grins whenever I ask them about anti-bullying school assemblies and how effective they are. “Enough already” is the unspoken answer that I hear.

So I wonder… why not teach the complexity of history in the context of bullying, too?

Indeed, the Mongol hordes and Roman legions were de-humanizing and enslaving their opponents long before Hitler, Stalin and Mao. Why not break from the course syllabus today to
talk about the JFK assassination and the national mood, both then and now? Granted, it is a tough subject to tackle, but I can’t think of any other that is more important.

As I reflect on today’s solemn anniversary, I am reminded of the many who dismiss the notion of any conspiracy in Dallas five decades ago, arguing that conspiracy advocates somehow find “comfort” in grand theories of elaborate plots, lest they be left with the disturbing reality that history turned on the actions of one insignificant man, the “lone nut.”

But I take the opposite tack—I think it is they who are desperate to find solace in a single assassin. Why? Because that absolves all of us of any collective guilt we as a society may feel for tolerating and/or fostering the pervasive climate of unhinged hatred that contributed to a
foreseeable and tragic consequence.

Forty-five years ago next June, The Rolling Stones had just recorded their song “Sympathy for the Devil” and were preparing to release the album. But then Robert F. Kennedy was gunned down in Los Angeles and left bleeding on national television. Mick Jagger told the record company to halt production because he needed to re-record one lyric. In studio, he
changed the line, “I shouted out, ‘Who killed Kennedy?’” to make it plural, ‘Who killed the Kennedys?’ The rest of the lyric remained the same:

Today, if we want the “better angels” of future generations to defeat their “inner demons,” don’t we owe it to them to teach what our species is capable of, both good and bad? In that way, hopefully we can cultivate empathy, compassion, civility, respect, and, yes, character. Otherwise, if we bury our heads in the sand to avoid teaching difficult lessons, then our
grandchildren will be forced to repeat the same battles again that our grandparents had already endured and survived.

So, out of respect for their efforts, let us not squander this moment.