We Truly Are All in this Character Effort Together 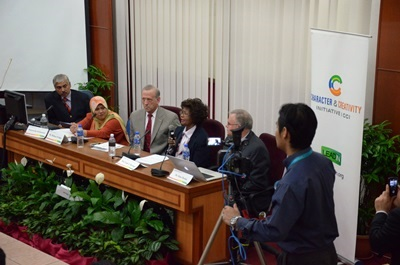 Earlier this month, I was honored to speak, facilitate, and moderate several sessions at the

Global Peace Foundation’s third annual International Summit on Character & Creativity in Kuala Lumpur, Malaysia. There, I shared an abbreviated version of our 11 Principles training, put in the context of transforming school social climate and culture, adapted to fit the customs of a given nation.

In attendance were hundreds of teachers, student teachers, administrators, policymakers and scholars from around the world. It was truly a mountaintop experience for me, just rubbing shoulders with such a diverse and accomplished group of people who share our passion for helping young people to become caring, ethical citizens. Why are ethics so important to all of us?

Well, a recurring theme that emerged from fellow attendees and the audience members at my sessions was an overwhelming sense that corruption, greed, nepotism, and bullying are absolutely thriving around the world, in schools, in businesses, and in governments. Delegates from Asia, Africa, and South America all lamented how corruption has seeped into virtually every facet of their societies. In many places, I was told, government officials require bribes before almost anything can be done. Bribes for a marriage license, a driver’s license, a birth certificate, a passport, you name it.

Meanwhile, prejudice and discrimination are just as pervasive, preventing many from earning coveted and deserved slots in higher education and later, in careers after graduation. For too many, the systems truly are rigged, and the corrupt practice has become so ingrained that most despair of ever restoring integrity.

But still they came to the summit, hopeful of finding supportive ideas and kindred spirits who are all committed to fighting the good fights in their respective nations. If old practices have been corrupted, perhaps they just needed to be more creative in finding ways to bring honesty and fairness back into the process. By teaming character with creativity—as this conference sought to do—the need for improving the former seems self-evident. However, the link to the latter was much less so. But I believe it is very important.

As I came to learn, creativity in some cultures is actually frowned upon and therefore hard to find. For instance, when I asked several Asian attendees what the top character quality is in their native land, they answered, “Obedience.”  Later, when I conveyed this to an Asian colleague and registered my surprise, he explained to me that in Asia, high grades are more important than just about anything else. “Achievement is king,” he said, adding that another of the social mores is that students in Asia do not ask questions, for fear of appearing disrespectful to the teacher or professor.

This reminded me of an observation that an American colleague who frequently lectures in Asia had shared with me. She told me that her students in Asia always seemed to be on top of the material she was teaching, but they don’t ask any questions. By contrast, back in the U.S., her students asked questions all the time, but often did not seem to understand her lectures. What does that say about our culture here?

But there is also something valuable in our American reputation for risk-taking and asking questions even before knowing where we’re headed and why?  We make mistakes, of course, but we are famous for being both creative and confident. People rarely, if ever, associate our nationality with obedience. So, I was struck by the irony. As study after study continues to show U.S. students falling behind the rest of the world in key measurable areas such as STEM, their creativity, brashness and independence are still the envy of the world. In particular, Asians seem to see it as ‘courage’, the character quality they desire most to help ignite their own creativity.

This paradox provided me with a new prism through which I viewed the in-flight movie, “Jobs,” on the long flight to Kuala Lumpur. The film biography of Steve Jobs, the late co-founder of Apple Computers, portrays him as brilliant, driven and innovative, an intensely creative human being who actually did start a revolution. At the same time, though, the movie does not pull punches in showing Mr. Jobs to be rude, abrasive, selfish, and chronically disrespectful, among other character flaws. After the conference, I could not help but think that Steve Jobs would not have survived, much less thrived, had he attempted to blaze his trail in Asia.

Which brought me back to that question of the creative spark. How does one kindle that flame of imagination without tolerating or encouraging socially unacceptable behavior? In other words, does a genius have to be a jerk?

On the contrary, I believe character education can actually help to unleash that creativity, by fostering honest inquiry and promoting ethical and rigorous debate. We can still ask questions and be polite, still disagree and be respectful. It is definitely a tricky balance, but one that is more than worth pursuing, no matter which spot on the globe you call home.