The Character of George Bailey 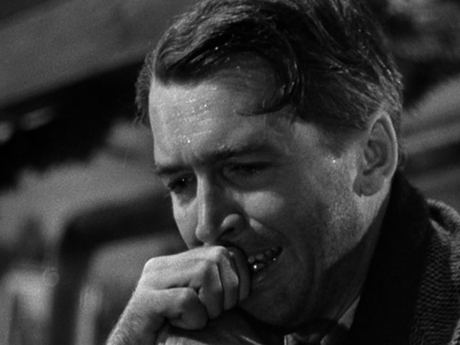 Frank Capra’s “It’s a Wonderful Life” is often dismissed as just another sentimental, feel-good Christmas classic. But, in my opinion, it contains one of the most gripping and compelling dramatic scenes ever captured on film.

As Christmas Eve revelers drink and laugh in a crowded tavern filled with festive music, the camera slowly zooms in on a desperate man at the bar, George Bailey (Jimmy Stewart). He is an extraordinarily good man, but at this dark moment, he is facing ruin, scandal and jail, none of it deserved. Talking to himself and staring down at his drink, he whispers to himself, “Dear Father in Heaven, I’m not a praying man. But if you’re up there and you can hear me, show me the way. I’m at the end of my rope. Show me the way, God.”

This harrowing close-up comes two thirds through this 1946 film that is still so familiar to so many of us. Indeed, some might say too familiar. Indeed, so many of us have watched this movie over the years—or passed on multiple opportunities to do so—that more than a few now roll their eyes at the prospect of committing two-plus hours to a syrupy, 67-year- old, black-&-white parable.

But if you’ve never seen “It’s a Wonderful Life,” or have not watched it again since you started caring about character education, then let me suggest that you set aside the time to do so this year.

Personally, I have long felt a connection to this movie, dating back 30 years ago this month, when I interviewed actress Donna Reed over the phone for The Cavalier Daily, the student newspaper at The University of Virginia. At that time, It’s a Wonderful Life was seeing a resurgence in its popularity, no more so than in Charlottesville, where the University showed the 135-minute film four times per night, for three straight nights, all on the weekend prior to first-semester finals. We all knew it was the administration’s thinly-veiled attempt to discourage student suicides during the dark and stressful days of winter exams, but we flocked to the theater, anyway.

Well, now that I reflect on it three decades later, after facing so many more life challenges than I could have imagined in 1983, I think what grabbed me then was the essential character of George Bailey. Despite dashed dreams and thwarted ambitions, his grit, resilience, empathy and compassion—his servant-leader attributes—reveal him to be a decent, caring human being determined to be a good father, husband, son, brother, business owner and contributing member of his community. Through the eyes of his guardian angel, Clarence, we see these qualities emerge, hoping against hope that George will see himself as we do before jumping from that icy bridge.

Switching to the lens of CEP, I offer these as the Top 5 character moments of George Bailey’s truly wonderful life. If any of you disagree, or prefer to add your own examples, please do so in the “Comments” section at the end of this blog. SPOILER ALERT: If you somehow have never seen “It’s a Wonderful Life,” you may want to stop reading here until you have.

TOP 5 GEORGE BAILEY CHARACTER MOMENTS:
1. As a big brother, he demonstrates decisiveness and leadership when he quickly rallies friends to form a human chain to rescue his younger brother who has fallen through the ice;

2. As a dutiful employee, he exhibits empathy and courage when he suspects that his pharmacist boss, Mr. Gower—distraught after receiving news of his own son’s death—has inadvertently filled a prescription with poison. George does not deliver the pills;

3. As a responsible business owner, when the stock market crashes on his wedding day, he reassures his panicked customers at the Bailey Brothers Building & Loan by personally guaranteeing their accounts, sacrificing the cash that he and his bride Mary (Donna Reed) have just received as wedding gifts. (Luckily for him, it was Mary’s idea!);

4. As a servant-leader who is accountable, even after Uncle Billy has carelessly lost the crucial bank deposit and forced George to “crawl” to Mr. Potter for help, he astounds his miserly nemesis—who actually possesses the missing cash!—by saying, “I’ve just misplaced eight thousand dollars. I can’t find it anywhere.” Brushing aside this selfless and inaccurate confession, Potter plants the seed of suicide, telling George derisively that thanks to his life insurance policy, “You’re worth more dead than alive!”;

5. As a desperate soul mistakenly convinced that suicide will save his family, George is about to take his own life by jumping from a snowy bridge into an icy river. But guardian angel Clarence jumps in first, using George’s character to save his own life. As Clarence explains afterward, “I knew if I were drowning, you’d try to save me. And you see, you did. And that’s how I saved you.”

During the dark fantasy that ensues, where George is allowed to see what the world would have been like had he never been born, Clarence tells him, “Strange, isn’t it? Each man’s life touches so many other lives, and when he isn’t around, he leaves an awful hole, doesn’t he?”
That message certainly resonated with me 30 years ago, and it remains with me today, not just at Christmas. Certainly, the movie contains other moments of character, displayed by George, as well as other players. But I’ll leave those for you to discover and discuss. My main goal here is just to dust off this old film and remind us all of what a powerful teaching tool it can be. Rewarding, too.

Capra, himself, reflected on It’s a Wonderful Life in1986, on the occasion of its 40th anniversary. “I wanted it to reflect the compelling words of Fra Giovanni of nearly five centuries ago [Christmas Eve, 1513, to be exact] : “The gloom of the world is but a shadow. Behind it, yet within reach, is joy.” http://www.gratefulness.org/readings/fra_giovanni.htm
Another 27 years later, I’d certainly say he succeeded. The joy at the end of Capra’s film is truly hard-won, but that only makes the redemption of George Bailey, and his force of character, that much sweeter.