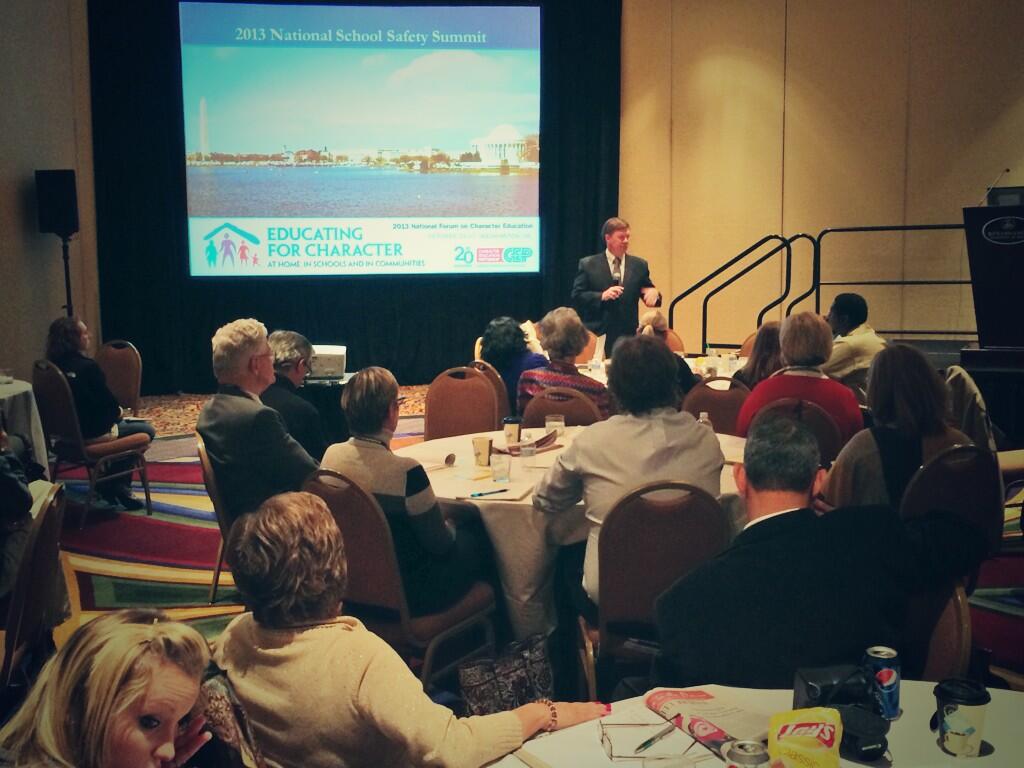 eeting in the wake of yet another school shooting—this one in Sparks, NV—speakers and attendees at CEP’s first-ever ‘School Safety Summit’ Oct. 24 in Washington, D.C., rallied around the ideas of  greater student engagement, wider community involvement and more robust support from the federal government.

“We are gathered here today with school violence again in the news,” noted John Barry, former superintendent of Aurora (CO) Public Schools. “From the 12-year-old who shot a teacher in Nevada to the 14-year-old who stabbed a teacher in Massachusetts this week, we are reminded that unfortunately, all of our jobs now must include training in crisis management.”

A retired Air Force general, Barry learned that lesson the hard way in the summer of 2012 when a crazed gunman opened fire in a crowded theater in Aurora, just four days before the new school year was to begin. Twelve people were killed and another 70 were injured in the mass shooting, the deadliest in Colorado since the horrific events at Columbine High School in 1999 that also killed 12.

The chaotic, emotionally draining hours that followed the mass shooting in Aurora reminded everyone of the compelling need for comprehensive emergency planning in the entire community. “My advice to all of you is to take the time and make the effort to establish and maintain relationships with the emergency response personnel in your communities, well before any crisis happens,” said Barry, who now runs VISTA Quest LLC, a college preparatory consulting firm made up of former ‘superintendents of the year’. www.vistaquest.org

Active Shooter Situations – New guidelines
Indeed, in the wake of such mass shootings as last December’s monstrous episode at Sandy Hook Elementary in Newtown, CT, which claimed the lives of 20 children and six adults, emergency planning, itself, has evolved. No longer is the recommended response in a suspected active shooter scenario in school simply to lock down and shelter in place, noted David Esquith, director of the U.S. Dept. of Education’s Office of Safe and Healthy Students.
“In active shooter situations, the FBI now advises those at risk to Run, Hide, or Fight,” said Esquith, explaining that the shift to more proactive measures hopefully will save more lives. The change is just one of the many recommendations to come from Vice President Biden’s Task Force on Gun Violence, which included CEP President Mark Hyatt. http://www.whitehouse.gov/issues/preventing-gun-violence

Another significant recommendation that made it into President Obama’s budget request for 2013-14 seeks $50 million in federal support for improving school climate programs nationwide. Unfortunately, the federal budget sequestration which remains in place even after October’s government shutdown will likely continue to block at least some of that funding. On the brighter side, however, Esquith did note that the continuing resolution (‘CR’) now in place to fund the federal government does include education grants for emergency planning, school climate, and specific ‘Project Prevent’ programs. “So, based on the CR, we are anticipating at least some funding going forward,” he said.

As the summit workshop wrapped up with audience feedback, one attendee, a reporter from AASA’s School Administrator magazine, said, “I’m really encouraged by all the positivity here.” CEP Vice President and summit moderator Joe Mazzola picked up on that theme. “That positivity, I think, is absolutely essential to the success of all this,” he said.

At that, an attendee from Puerto Rico added, “If you truly believe that character education can be the difference, then it will be.”