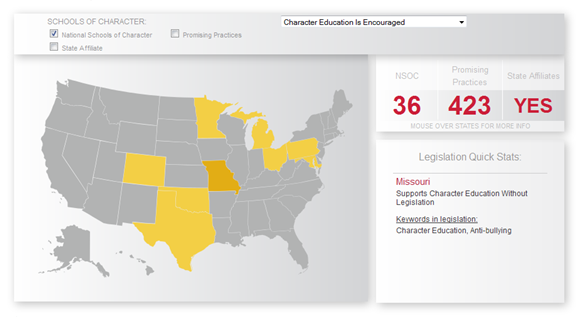 CEP often receives inquiries from researchers asking about state-level character education legislation or from teachers and parents who are interested in finding a local National School of Character. In order to share this valuable information with a larger audience, Character.org has developed a new at-a-glance tool—the Character Map.

CEP has been tracking and collecting information on legislation for many years, but this is the first time we are providing the information in such an easy-to-access format. We hope that the map will become a tool for schools, families and citizens to learn more about their states, to stay active in promoting character education, and to connect with local leaders through the National Schools of Character network.

Some states, like Indiana and New York, specifically mandate character education to be included in curricula. Other states, such as Kansas and Pennsylvania, encourage it through grant opportunities or recommended resources. Still other states may support character education initiatives without directly referring to it in legislative documents.

Not all legislation looks the same, either: while many states require districts to have an anti-bullying policy in place, some are more prescriptive than others. “Character education” is not always the preferred term—many states have legislation referring to “character development,” or “socio-emotional character development.” All of these can go a long way in supporting crucial programs for schools, and the map highlights the differences in vocabulary through legislative keywords. Performing this research on each state has also revealed many exciting programs such as Washington’s Compassionate Schools initiative, providing teacher training to support students who have experienced trauma.

How can the Character Map help me learn more about National Schools of Character?

The Character Map is a great way to find information about your state, or any other state you may be curious about. Hovering over the state will show you some quick information but when you click on a state, it will bring up detailed information including a listing of current National Schools of Character (NSOC), with links to each school’s page. NSOC pages include wonderful stories and pictures from the schools, as well as a great lesson plan. We hope the map will help parents find local Schools of Character and encourage more schools to follow the example to undertake transformation and apply to become a School of Character.

What else can I learn from the map?

In addition to information on legislation, NSOC and Promising Practices, the map includes links to resources and State Schools of Character (SSOC) Coordinators. Currently 31 states have a SSOC Coordinator who assists with the Schools of Character program, recognizing schools for their achievements at the state level. These wonderful partners have a long history of helping CEP fulfill our mission and extend our reach—learn more about them and the wonderful work that they do. If your state doesn’t have a SSOC Sponsor, maybe your organization would be interested in becoming one?

Because there is so much information contained in the map, and so much going on in each state, it will always be a work in progress. We would love to keep the map as up to date and accurate as possible. Please e-mail advancement@character.org if you have anything to add, update or correct.