Character Beyond the Classroom: Cesar Chavez and Fred Korematsu 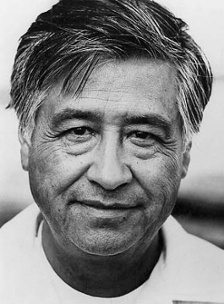 Anthony Chavez spoke to attendees about how his father was driven to action. After spending years as a farmworker and witnessing excessive abuse, Chavez was moved to lead a movement demanding rights for American farmworkers.

Chavez believed strongly that education was critical to changing attitudes towards farmworkers in the United States. After undergoing abuse countless times, he said “It’s not the immigrants we need to go after, it’s the ignorance.” He stressed further the importance of public service, believing that “the end of all education should be service to others.”

Throughout this time, his fellow activists would grow weary with the fight. Anthony told the story of how Chavez would push his fellow activists. “Each morning, you’re waking up with an attitude that says, ‘No Se Puede. No We Can’t.’”, Chavez would say. “The only way you can ever achieve what you hope for is to wake up every morning with the attitude of ‘Si Se Puede! Yes We Can!’” His positivity was critical to the success of his movement.

Chavez’s legacy lives on through his impact and his family. Today, they promote the values he espoused in life – service to others, knowledge, respect for life and the environment, acceptance of all people, and celebrating community. At the end of Chavez’s life, though he had never made more than $6,000/year or owned his own car, his commitment to his cause and his character as a leader had made him successful. At the end of the day, his motivations were selfless, fighting for the farmworkers he had toiled next to throughout the years.

Anthony shared a story that exemplified Chavez’s love and commitment to the people he was fighting for. Walking along one day, many people were expressing their love and admiration for Chavez. When a friend asked Chavez what it was that made others admire him so much, he said, “The feelings mutual.”

Today, the Chavez Day of Service is celebrated in California school, and projects have included skate parks, grounds maintenance, a “Fast for Non-Violence”, and many other community services. As Anthony communicated to attendees, this was the vision Chavez had, and we each “have to find the passion inside each of us, and let that be the wind in our sails.”

Few people were as “all-American” as Fred Korematsu. As Karen Korematsu, his daughter, shared with attendees on Friday, he “loved hot dogs, baseball, and hanging out with friends. He was a Boy Scout and a Lions Club leader.” Despite this, Korematsu was treated as an outsider by many people, and he experienced substantial discrimination at a young age. But “he let that roll off his back. He was determined to live life.”

This kind of grit and determination is a consistent theme in our public leaders, a character trait that enables them to overcome enormous backlash to their efforts.  Despite being told that, due to his race, he could not enlist in the National Guard after Pearl Harbor, Korematsu went straight down to the Coast Guard office, trying to find another way to serve. Unfortunately, they also turned him away due to race.

Fred Korematsu is most famous for what happened next. After Executive Order 9066 was given – requiring all Japanese on the west coast to pack up and move to internment camps – Fred resisted. Eventually he was caught, and lost his historic court case before the Supreme Court. Of the decision, Justice After this ordeal, he was sent to an internment camp. But his resolve didn’t waiver, even when other internment camp members avoided him so as “not to be seen as troublemakers.”

After the war, Fred Korematsu went on about his life – pursuing a career, raising a family, and eventually even receiving the Presidential Medal of Freedom, the highest civilian award that can be won in the United States. Korematsu never stopped advocating for the government to acknowledge its wrongdoing by forcing Japanese-Americans into internment camps. His efforts were vindicated when the court overturned his case, clearing his name. Never one to give up the fight, Korematsu declared, “I would like to see the government admit that they were wrong and do something about it so this will never happen again to any American citizen of any race, creed, or color.”

For both of these men, Cesar Chavez and Fred Korematsu, their actions reflected strong character – the fortitude to stand up for what they believe is right in the face of enormous pressure, the persistence to keep fighting when it looked like a losing battle, and the patience to fight year after year, dedicated to their cause.