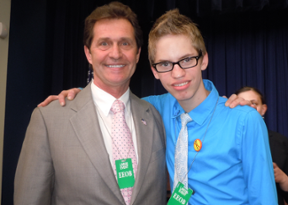 Last Friday I had the honor of representing CEP at a special White House screening of the movie, Bully.  The movie is heart-wrenching.  When it was over, I felt sad, disappointed, emotionally drained and angry.  I can remember thinking to myself, “My gosh, how in the world can we as a nation allow this sort of thing to happen?  Aren’t we better than that?”

Bully, in the end, is really a graphic depiction of a breakdown of good character in many ways—on the part of the bullies, the bystanders, and even some school administrators and teachers.  It’s also a sad reflection on our culture—we as human beings.  After the film, several parents and students who were in the film spoke, along with the director, the Secretary of Education, the Sr. Advisor to the President and the Superintendent of Schools for Sioux City, Iowa, who showed great courage in opening up his school system for taping.

All of them seemed to agree that the movie should be seen by all educators, as well as parents and older students.  They stressed that the movie can and should be used to start an important dialog.  Several speakers also rightly said that we must come together and make a cultural change. This is a tipping point moment, one said—and if we don’t get it now, who knows when we will.

Now having said all of this, the one striking shortcoming of Bully, is that it is entirely problem-focused.  There was basically nothing said about solutions.  As for the discussions afterwards, it was crystal clear everyone genuinely and strongly supports taking action to solve this horrific problem.  However, most of the comments were broad generalities, like “starting dialog, getting past definitions, working together.”

The day after the White House screening, a somewhat related article by Peggy Noonan appeared in the Wall Street Journal.  It was called “America’s Crisis in Character.”  She cited several recent examples that have been in the news – a tourist beaten in Baltimore with young people watching and laughing…Secret Service agents partying with prostitutes…GSA officials at a lavish Las Vegas casino living it up at taxpayer expense…US troops posing with bloody body parts of suicide bombers.

Noonan’s main point was not the scandals themselves.  Instead, it was that they collectively represent a disturbing and growing deterioration of public behavior.  And, she made the point that more people are getting worried about the American character—“who we are and what kinds of adults we’re raising.”

Although Ms. Noonan’s piece was spot-on and quite perceptive, it was one more example of “problem identification.”  The closest she came to a possible solution was when she said, “Something seems to be going terribly wrong.  Maybe we have to stop and think about this.”

Time to think?  NO – It’s time for action, people!  We all need to work together and that means doing more than “thinking about” the slow but steady decline in American character which is taking place right before our eyes.  And, we need to do more than “start a dialog” when it comes to eradicating out-of-control bullying that is destroying (and, sadly, often ending), far too many lives.  We’re better than that!

CEP can provide concrete help on both of the above fronts – developing future adult citizens of good character for our communities, nation and world…and taking action to end bullying in schools. You see, we take great pride in being an action or solutions-based organization, one that stands ready to help any teacher, administrator or parent as they struggle looking for solutions to major problems like bullying.

For the past 15 years, we have studied schools.  From it, we have learned what works when it comes to creating safe, caring, supportive school cultures, and what helps to develop good character in young people.  Last year, we identified 44 national schools of character.  Nearly two thirds had survey data available on school climate and shared results with us.  Collectively, the data showed that 87% of students in those schools felt safe at school or that bullying was rare.

If you want help, solutions and hundreds of real-world strategies and best practices that make a difference, please go to the CEP website, www.character.org.  When there, you can learn more about what these and other national exemplar schools are doing to help eradicate bullying, while fostering acceptance, respect, responsibility, and more.   Also, I urge you to download a free copy of the 11 Principles of Effective Character Education.  One successful school principal said they served as the “GPS system” she used to improve her school’s culture—and doing that is far more important than talking about it.

Now let’s all get to work.  What specific strategies have you used to help eliminate bullying in your school?  Please share them and help others solve this terrible problem.