Be More Than a Bystander: Speak Up Against Bullying and Violence 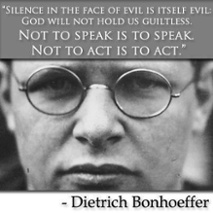 Since I started working with CEP over a year ago, I have found myself looking at virtually everything I do—see, hear, read about, etc.—through a prism of right-and-wrong, searching for a teachable moment in just about every action. But even so, I still feel that my experiences over the last five weeks have been unusually dominated by one recurring theme: the importance of speaking up.

It started in early March with a trip to New Trier High School, just north of Chicago, to see a presentation by Emily Bazelon, author of Sticks and Stones, her new book on bullying and the indispensable role that character and empathy can play in defeating it. That night, she told a rapt audience of parents and teachers that bystanders really hold the key to changing the equation.

“Research shows that bystanders intervene only 20% of the time, but when they do, bullying

stops about 50% of the time,” Bazelon said. Even the smallest act of intervention can work wonders, she added. “Bystanders can help in many ways, simply by standing with the victim or touching their shoulder during an incident, or even by sending a supportive text or calling them on the phone afterward.”

That statement was still fresh in my mind a week later when I finally watched director Lee Hirsch’s award-winning documentary “Bully,” now available on DVD. The movie, which opened in theaters  last April, follows the harrowing stories of five middle school and high school students from across the U.S.  One focal point is the ongoing work of Kirk and Laura Smalley, whose 11-year-old son Tyler took his own life in 2010 after an extended period of relentless bullying. Since then, the Oklahoma couple has been on a mission to turn “bystanders into upstanders,” barnstorming the country with 590 presentations at schools in 23 states. So far, their nonprofit has enlisted more than 635,000 kids to pledge, “I am somebody who will take a stand for the silent.”

Meanwhile, the movie, itself, has morphed into a bona fide movement, aka The Bully Project, offering discounted Educators’ DVD & Toolkit packages and aggressively promoting its own pledge. To date, more than 880,000 people have signed up to “take a stand against bullying,” which means that the initial goal  of 1 million names is now well within reach. (For more:  www.thebullyproject.com)

On Palm Sunday, I was reminded why the idea of “speaking up for the silent” can be easier said than done. As a favor to a friend at church, I gave a ride home to a young man who is the foster-child of a neighbor who works the night shift. The 15-year-old freshman is a transfer student at the same high school from which my son is about to graduate in south suburban Chicago. To make conversation during the brief trip, I asked the teen if he had had any experience with bullying at either of his schools. “Nothing here,” he said. “But at my old school (just west of downtown Chicago), well, they shot this kid. They’d been messing with him for a long time and then just figured they would shoot him, so they did.”

Shocked, I asked if the victim was okay?  “Yeah, I think so,” he said.

And the armed classmates, had they been arrested?  “Nah, we had a strict ‘no snitch’ policy there.”

Were you ever bullied? “Nah. I got a couple of big cousins there, plus I always tried to be nice to people.”

What about other incidents of bullying? “Well, there’s a tunnel there that runs between two buildings and it’s pretty dark. Guys would wait down there and jump nerdy kids and beat them up. They’d jump some teachers, too.”

Teachers?!  Did anybody ever get in trouble? “Nope. ‘No snitch’ policy, remember?”

Did the school have any anti-bullying policies, assemblies, posters, etc.?  “Yes, but no one pays any attention to those things.”

When I looked up the location of the school on Google Maps, someone had left this anonymous comment: “it is the most rawest school ever and I never seen nothing like it.” (sic)

Think any of this is an exaggeration?  Then consider this: Last week, First Lady Michelle Obama came to Chicago to rally support for the urgent ongoing effort in Washington to pass meaningful new gun legislation. While here, she visited Harper High School in one of the city’s worst neighborhoods. In the last year alone, 29 current or former students there had been shot, 8 fatally.

So speaking up takes courage and character, putting one’s self at risk to challenge the common but misguided notion that there is honor in silence. If that were truly the case, though, why would such a code have to be enforced via fear and intimidation?  And how can any group that maintains ‘discipline’ that way even pretend to claim the moral high ground when organized crime and totalitarian regimes basically keep their people in line the same way?

That last thought occurred to me earlier this month when my daughter’s eighth grade class visited the Illinois Holocaust Museum and Education Center in Skokie. The trip correlated with the global observance of Holocaust Remembrance Day on April 8. On that day, a friend of a friend posted this memorable quote from Dietrich Bonhoeffer, the German theologian and Lutheran pastor who was executed in 1945 for active opposition to the Nazis.

But most opportunities to speak up and to do the right thing are not nearly so fraught with danger. And the more of us who are willing to take a stand, the easier it becomes for the next bystander to find the courage needed to become an upstander. So, despite the discouraging headlines we seem to see every day re cheating, bullying and even youth suicide, we should all draw strength from the growing numbers of character-driven souls who are teaming up to say publicly that “enough is enough.”

On April 3, Cartoon Network and the American Federation of Teachers announced a new Bullying Prevention Partnership that will provide educators in more than 1,000 schools nationwide with a classroom toolkit of materials and curriculum suggestions.  The joint effort adds to the momentum that started three years ago when Cartoon Network first launched its “Stop Bullying: Speak Up” campaign in association with CNN and Time Inc. To date, more than 265,000 people have pledged their support online and its Facebook page has received 1.6 million likes.

Just today, in fact, Cartoon Network and CNN also announced that on April 28, they will broadcast without commercials Lee Hirsch’s follow-up documentary, ‘The Bully Effect’, on national television, and host a ‘live’ online Q&A chat-room afterward.

Finally, a week ago, I took leave of CEP for a day to serve as a Cook County Election Judge. My precinct was located in the gymnasium of the elementary school where my wife teaches. Naturally, I had thought that I would be shelving this subject for the day, but after getting settled into my seat, I turned around to see this PBIS poster over my shoulder: “S.W.A.T.” for “Stop, Walk Away and Tell an adult”. On a day when voter turnout was unfortunately very light, the message on the poster had 14 hours to sink in.

For more on this subject, you may also visit these websites: